Delighted to see #IWSB 2010-2012 PGP alum, @SumitGunjan, who anchored the school for children of construction workers in the evenings on campus, being featured in the Indian Express today. 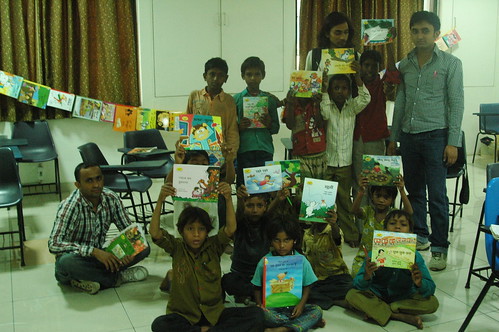 Sumit Gunjan has always been an epitome of empathy; a fine human being who always strived to create an impact wherever he was! Blessed to have such purposeful, passionate, persevering human beings who walked into life.

The above photograph is from the occasion of launch of the library for children at the evening school, when Indira and Mallika bought over 200 books for children from CBT and other sources. The evening saw story-telling and book reading sessions. More of the photos can be seen at the album Mull-A-Cause

Here I am copying the Indian Express Story, as it appears on its website. I humbly thank IE.

In hostel for tribal children near Ranchi, lessons on how to stay close to roots

Two events, two years apart, were to set Sumit Gunjan on a journey that would not only change his life but that of scores of tribal children in ‘Bal Nivas’, a hostel he set up for them in Banta-Hajam, a village in Silli Block, 70 km from Ranchi.

The first was eight years ago, in 2010, when Gunjan, then a 20-year-old pursuing a post-graduate management programme in a Greater Noida institute, came across a group of children of construction workers at a plot near his college. He began engaging with them, holding informal classes for them with the help of his batchmates and a few professors.

The second “turning point” was in early 2012, when Gunjan, still with the Greater Noida institute, undertook a “research yatra” to Jharkhand for the National Innovation Foundation (NIF) in Ahmedabad to study medicinal herbs used by the tribals of Jharkhand.

The first time Gunjan, the youngest of three children of a district court lawyer in Jharkhand’s Giridih, visited Banta-Hajam, he stayed for five days. But he kept coming back to the village, fascinated by the tribal way of life, until he finally decided to stay on for good that April.

Gunjan also worked in the fields, did errands and lived like any other member of the Munda household. “From then until today, we have never discussed rent. I live with them, work with them, eat with them,” says Gunjan, who has a Bachelor’s degree in management from Durgapur, West Bengal.

A couple of years ago, Gunjan, with help from villagers, friends and well-wishers, set up Bal Nivas, where 35 tribal children are imparted knowledge of traditional tribal languages, and trained in singing, dancing, classical music, computers and spoken English, besides vocational skills such as bee-keeping and knitting.

The children, all of them from the village, live in Bal Niwas, cooking their own food and cleaning their living quarters. While some children go to the primary school in the village and others to schools in Ranchi, they come back to the hostel, where they are encouraged to stay connected with the tribal way of life.

“At any given point, we teach around 35 children, of whom 25 are girls. They learn music, folk and classical, instruments such as the tabla, harmonium and even the tuila, a traditional tribal instrument on the verge of extinction, the do-tara and the mandolin,” says Gunjan.

When he arrived at Banta-Hajam village, Gunjan realised the children had limited language skills, and were not interested in studying. That’s when he came up with the Bal Nivas concept. “Initially, this was a place to give young children time after formal school where they learned basic things like mathematics and language through activities that were part of their own milieu like local games, which children don’t play these days,” he said.

At present, there are around 15 children, including seven girls, who live at the Bal Nivas. “Most of these children either do not have a father or a mother or are orphans. Also, we take children, who are generally dubbed failures by their own community or those who veer towards alcoholism and other vices at a young age,” he said.

The villagers donate rice every week, while the children have created a fund, donating Rs 2-3 a week. Gunjan also earns by teaching at two teachers’ training institutes in Koderma and Giridih.

Gunjan says he realised that to impart education to tribal children, he would have to first understand them better. “They ate rice three times a day. I started having the same diet and realised it was affecting my stamina. It then became easier for me to explain to them why having a balanced diet, especially for children, was necessary,” he says.

Some of his friends from NIF pushed Gunjan to introduce machines for sowing paddy. “But I decided to sow the saplings myself, along with the women. I then realised how it was also a place and platform for women to socialise. They would sing their traditional songs and come to know about each other’s lives. If we introduce machines, this beautiful thing would be lost. I am not against technology, but it has to be integrated with the milieu in which it is to be introduced,” he says.

Villagers are full of praise for Gunjan’s efforts. “Earlier, the only option for a young boy growing up in these parts was to migrate for work, or fall in bad company and take to liquor and other intoxicants. Gunjan has brought the focus back on all the good practices and traditions that we lived by but have now forgotten,” says Jogendra Gope, a folk singer, on whose land Gunjan set up the hostel. His daughter Sumati now learns classical and folk music at the hostel.

However, the journey wasn’t always smooth. “Last year, some people, upset with what Gunjan was doing, approached the panchayat. They wanted to know why so many girls were in the hostel and why they were being trained in music and dance. But, we stood our ground and, finally, they relented,” says Ramesh Chandra Kumhar, a lac businessman who lives opposite the hostel and who trains the children in vocational skills.

Kumhar says the reason why almost all villagers backed Gunjan was that the change he had brought about was for everyone to see.

Suraj Patar Munda, one of the students at Bal Nivas, says, “I had fallen into bad company and would take marijuana and never attend school. Now, I have left all that and I’m getting trained in music, besides English and computer,” says the teenager who is enrolled at the Ramakrishna Mission School in Ranchi.

Gunjan says he could win the trust of parents, especially of girl students at Bal Nivas, because he kept things transparent. “We would invite parents to live with us at Bal Nivas. When they saw for themselves how things were, they felt good about it and believed me,” he says.

The biggest certificate of their trust came in 2015 when he travelled with some of the children to Ahmedabad for the annual Satvik Food Festival of NIF. “For a village where girls are not supposed to go beyond Ranchi without men escorting them, it was a big thing,” says Gunjan.

One of those who made that trip to Ahmedabad was Ashtami Patar Munda, the 15-year-old daughter of Munda, at whose house Gunjan stayed when he first came to the village in 2012. “For the first time, I saw a world outside our village. Had it not been for Gunjan bhaiyya, it would have been unthinkable. I want to follow his footsteps,” she says.

Jharkhand’s Commission for Protection of Child Rights chairperson, Arti Kujur, who has attended a couple of cultural programmes organised by Gunjan’s students, says, “He got the artistes to perform to themes such as child marriages and human trafficking, which is a problem in these areas. Also, he has gained the confidence of the tribals. It’s not easy.”

But what really matters for Gunjan are lines like these, delivered with a warm smile. “For us, he is one of our own. He has changed our lives for the better,” says Alam Khan, a resident of Banta-Hajam.