Categories like traditional and contemporary dissolve in Tagore’s poetry which essentially catches Eternal Man, in all his colours. A scholar on Tagore’s works, Dr.Utpal Banerjee (recognised with a Padmashri award for his expertise) conceived of a delightful evening of classical dance hosted by Indira Ganesh and organised by R.Sreenivasan, under the aegis of India International Centre at the IIC auditorium, based on Tagore’s poetry.Established dancers selected from various dance disciplines, specially known for their sensitivity in abhinaya, in order of appearance, were Puvadhanashree (Vilasini Natyam), Kavita Dwibedi (Odissi), Pratibha Prahlad (Bharatanatyam) and Saswati Sen (Kathak). 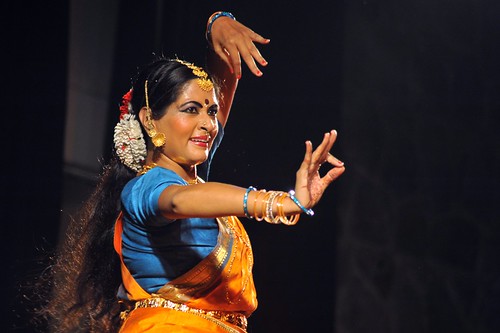 With Kamalini Dutt’s creative collaboration, the poem Purva selected for interpretation Saadh (The Desire), by settling for a vocalist like Samina De singing the original Bengali poem, preserved the linguistic ambiance of Tagore’s work, with Tanjavur Kesavan’s rhythmic inputs and mridangam accompaniment, tabla by Gyan Singh, Dr. S vasudevan’s nattuvangam and Rajat Prasanna’s flute chiming in with sensitive support. Purva’s interpretative skills, honed under years of training in Vilasini Natyam under Swapnasundari exudes an inner joy which ideally chimed in with the uplifting nature of Desire, where hope and expectation rising high bloom among the clouds and amidst the stars. This abstract state-of-being lost amidst the birds floating in comfort in the sky, was convincingly caught in the dancer’s highly internalised interpretation. Not going beyond the grammatical boundaries of the lasya-filled Vilasini Natyam even in the teermanams, the dance not having the ambit of bodily spread of Bharatanatyam leaps and jumps and leg stretches, the dancer through intensity of feeling (filling the dancer’s inner space), retained in the contained performance the soaring feel of taking off into space in joy. Lines like “..hriday mor megher mato, aakaash maajhe haasity chaay” or “paakhir gaan laage re Jena, deher chaaripaashe” with the songs of birds caressing the body were very suggestively brought out in the dancer’s gestures and expressions. Sung in the form of a thumri with feeling, the joyous finale with the garden filled with sounds of Dawn’s laughter and the laughter of flowers got represented through a Tillana in Kapi ragam sung by A.Venkateshwar, winsomely rendered through light footed nritta. 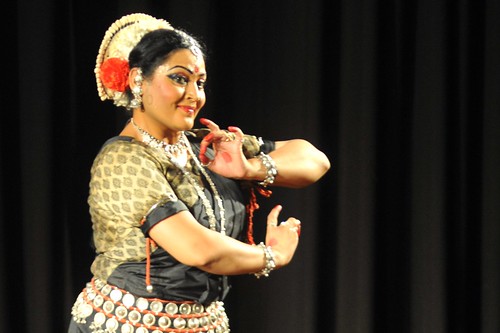 Odissi dancer Kavita Dwibedi in Shapan (The Dream) “Dine hai ek-mato rate hai aar” wondered at the polarities she saw in herself – from what she was in her wakeful state and what she became in her nocturnal dreams – seemingly representing two contradictory selves – one a reluctant school goer being pushed by her youngest uncle, the other flying in the sky, a cloud searching for the rainbow, travelling on the wings of the wind, crossing the seas to spread ‘water -showers’. Rudely awakened by the thunderclap, she trembles looking for Mom, nowhere near. Kavita’s evolving artistic creativity now has the strong support of singer Suresh Kumar Sethi, whose Pallavi composition in Brindavan Sarang for this work, coming in as punctuation after every interpretative segment, changed the level of the work completely. With Aavery Chaurey for guidance, and her own very involved expressional talents (her now more trim presence aesthetically turned out), Kavita’s Odissi did full justice to the poem, Indira Mukherjee helping out with the poetry recitation parts. While the nritta parts for the Pallavi were well conceived and laya perfect, the chauka position so central to Odissi, tended to be less articulated than required. 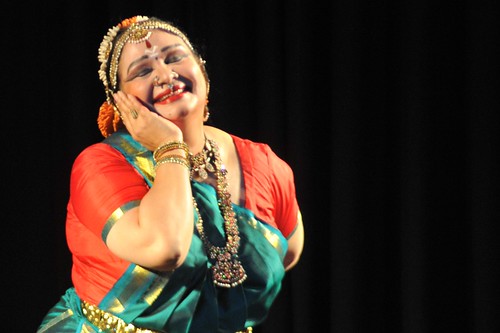 Pratibha Prahalad in her Bharatanatyam homage to Tagore and Utpal Banerjee, skilfully wove in passages from three poems – exploring the mother/child relationship – Aakul Aahbaan (The Fervent Call), Maa-Lakshmee (Goddess Lakshmi), and Shishur Mrityu (Death of a Child). A mother’s heartache at the loss of a child, the apple of her eye on whom she has lavished all love and care, whose heart could not bear the slightest tear in the child’s eyes and she sorrowfully asks Nature why as Lord of endless treasures, Nature needed the victorious thrill of emptying a mother’s heart by taking away the one treasure of her life? The dancer’s knitting of selected passages from each into a seamless whole, had Sudha Raghuraman’s very moving music in Neelambari, in Vasantha and finally in an evocative.Tanam passage set to Kalyani. Sudha added bhava through the contours of the raga while the highly emotive passages in Bengali were recited by Mahua Chowdhury. Stages of the child growing up under the mother’s care and love came as interspersed passages while the refrain of the Mother anxiously awaiting the daughter’s arrival – …”Kothay gelo Raanee aamaar Raanee” became the eternal cry of the bereaved mother. The dancer in a theme, which could have strayed into exaggerated histrionics, retained the aesthetic level undiluted. Chandrasekhar’s muted mridangam and G. Raghuraman’s plaintive flute notes added to the total impact. 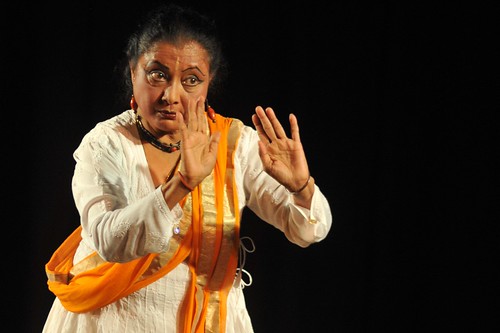 Saswati Sen, given her penchant for abhinaya, had the double advantage of dealing with home territory –for as a person from Bengal, she was on familiar ground with Tagore’s poetry. Banabaas (Banishment to the Wood) is a quaint child/mother interaction, wherein the child challenges the mother that if he only had a brother like Lakshman for company, he too would go to the forest without qualms, if his father like Rama were to send him. He would, under a tree shade, fix up a home for all, and would feed the deer with the tree leaves, make a garland out of the blooming flowers, share the fruit he collected with brother Lakshman, eating out of a lotus leaf, play a tune on the flute and watch the peacock dance, and the squirrel scurrying around. But for all that – he had to have a brother like Lakshman. The poem clearly echoes the child’s cry for a sibling. Saswati successfully drew on Kathak’s ancestry with the Katha vachak tradition, for the narrative bits of a mother/child dialogue. Kathak’s rich nritta bits of ginti compositions, tukras and Mayur gat, became links connecting interpretative passages with some footwork also woven in. Music composed by Pandit Birju Maharaj , had Abirban Bhattacharya for the vocal support with Utpal Ghosh on the tabla and Ajay Prasanna providing flute accompaniment.

Utpal Banerjee could hardly have wished for a better thanksgiving than what the evening provided. 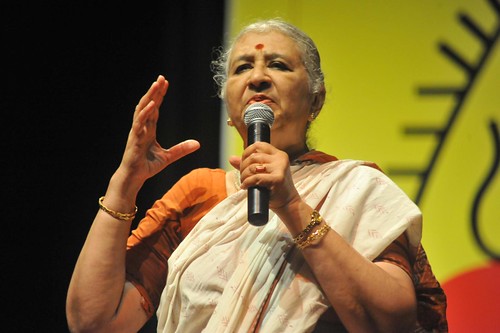