In Hyderabad, through the childhood, we have been brought up with the music of Late Sri Ghantashala lilting in our ears every morning, and the character of ‘Sathyabhama’ and her ‘natkat pan’ vis-à-vis Krishna was part of the folklore diet.

When I heard of ‘Bhamakalapam’ as the theme of the dance this evening, I had to go. It was interesting because of the Jugalbandi format – two characters in two different dance forms – Bharatanatyam and Kuchipudi; added to it enchanting ‘Satyabhama’ was portrayed by a male !! What more you could ask for.

The Performance, with two different dance forms juxtaposed against each other, with their own movements and the bhava, was aesthetically evocative. Ajay Kumar, the Kuchipudi dancer from Vijayawada, portrayed the ever-green character of Satyabhama, while the Bharatanatya exponent Sathyanarayana Raju from Bangaluru was the Krishna. The performance was part of the festival Samvaad, organized by Ms. USha R K, an eminent art consultant, at the Deshmukh Auditorium with active support of India International Centre. 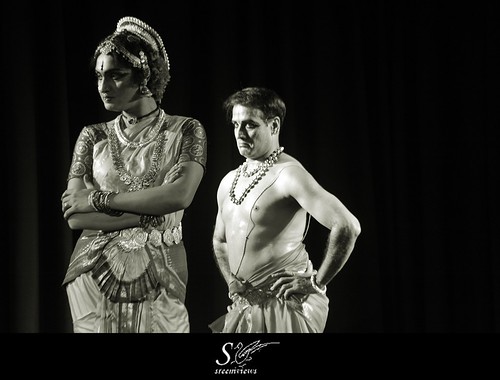 The seasoned exponents did make the evening very lively. Especially Ajay, the Satyabhama, trained in Kuchipudi from a tender age of four, has mastered the art of portraying ‘Stree Vesha’. He stole the show under the nose of more experienced and better known Satyanarayana Raju; more so because of portraying a woman,Satyabhama, I suppose. Audience had their eyes more on Satyabhama! Ajay was performing in Delhi for the very first time, while I have captured Satyanarayana Raju quite a few times in the past.

I am sure, no one, who walked in after the initial announcement, would have made out that the Satyabhama character was being portrayed by a male. The grace with which Ajay flourished on the stage was fabulous. Ajay, from the very entry, draped in a cream and red sari in the garb of Satyabhama, was captivating. His movement, gestures, expressions brought out the best of the female traits and personality. Only give away, for a very keen eye, would have been the body structure of a male vis-a-vis female. 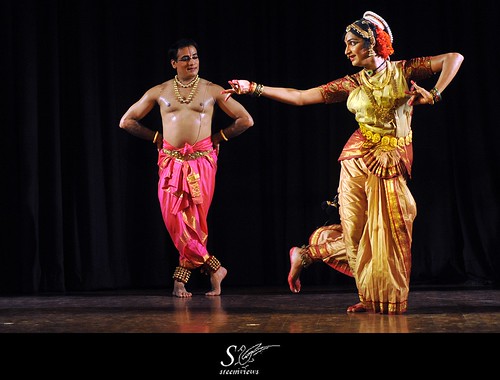 The Abhinaya – Satyabhama’s character of being haughty, the tiffs with the lord Krishna, the pangs of separation – flowed effortlessly from Ajay. Ajay has mastered the soft, gentle and fluid feminine movements too. It was compelling. It was Ajay’s show all the way; Raju, true to the character of Krishna vis-a-vis Satyabhama, looked like a mere spectator. He also let it be, in true spirit of the characters, I must say. Of course without Raju’s Krishna, Satyabhama would not have been as effective!

Looking forward to watch more of Ajay in the future; and love to see him mentor more disciples who will not let this art-form a thing of past.